As is often the case, a lib written in C may expose an API which accepts a function pointer as a callback function like:

But still it’s inconvenient since we have to care about the lifetime of the data pointer manually which may cause memory leak.

If you are familiar with C++, it won’t take too much time to wrap it with std::function like:

Then we could rewrite previous code in a little more modern and safe way:

Now we could pass a std::function, in other words, a closure with such a simple wrapper and enjoy various modern C++ utilities.

A closure typically consists of a pointer to the function and the corresponding context (captured variables etc.) which the parameter callback and data in the original function signature is exactly for.

But wait, not all callbacks API is designed like this. For example:

So here comes the challenge: Could we pass a closure as a raw function pointer? It sounds impossible but I find libffi achieves it indeed:

Let’s see the tricks behind libffi.

As explained just now, a raw function pointer is just an address and doesn’t carry any callback-related context at runtime. Thus, the only solution is to allocate a static memory and access it within the callback function. However, we still need something to distinguish between callbacks and you may already guess it. Yes, the address of the function pointer itself can work as the unique identification, though such usage is quite uncommon.

Basically, the idea of the libffi is to use extra memory to store data for each closure but the design is pretty interesting.

The core concept of the implementation is called trampoline. Each trampoline consists of two important fields: code and data. The code is the entry point of the registered callback. It would have multiple copies in the memory to have different addresses. The data is the context data related to a callback. Below is the code snippet of the trampoline:

So the secret is that: the offset between the code and data of a trampoline is fixed! Therefore, when a function pointer can be used as a callback, it is also the address (after plus the fix offset) of the callback data. After preparing both the real callback address and the callback data, it jumps to some other wrapper code by jmp *%r10.

Another question is that: how is the offset calculated? To keep the fixed offset between code and data, libffi allocates two continuous 4k (UNIX64_TRAMP_MAP_SIZE) memory regions. So the offset is 4k minus the total length of instructions from beginning to the current one. Assume we are in linux 86_64 with endbr64 available, we could calculate the X86_DATA_OFFSET as:

And that’s exactly the offset defined in the code snippet above.

An interesting thing is how libffi finds the trampoline table:

Note that the trampoline code is repeated multiple times by .rept to fulfill the 4k memory.

To summarize, see figure below: 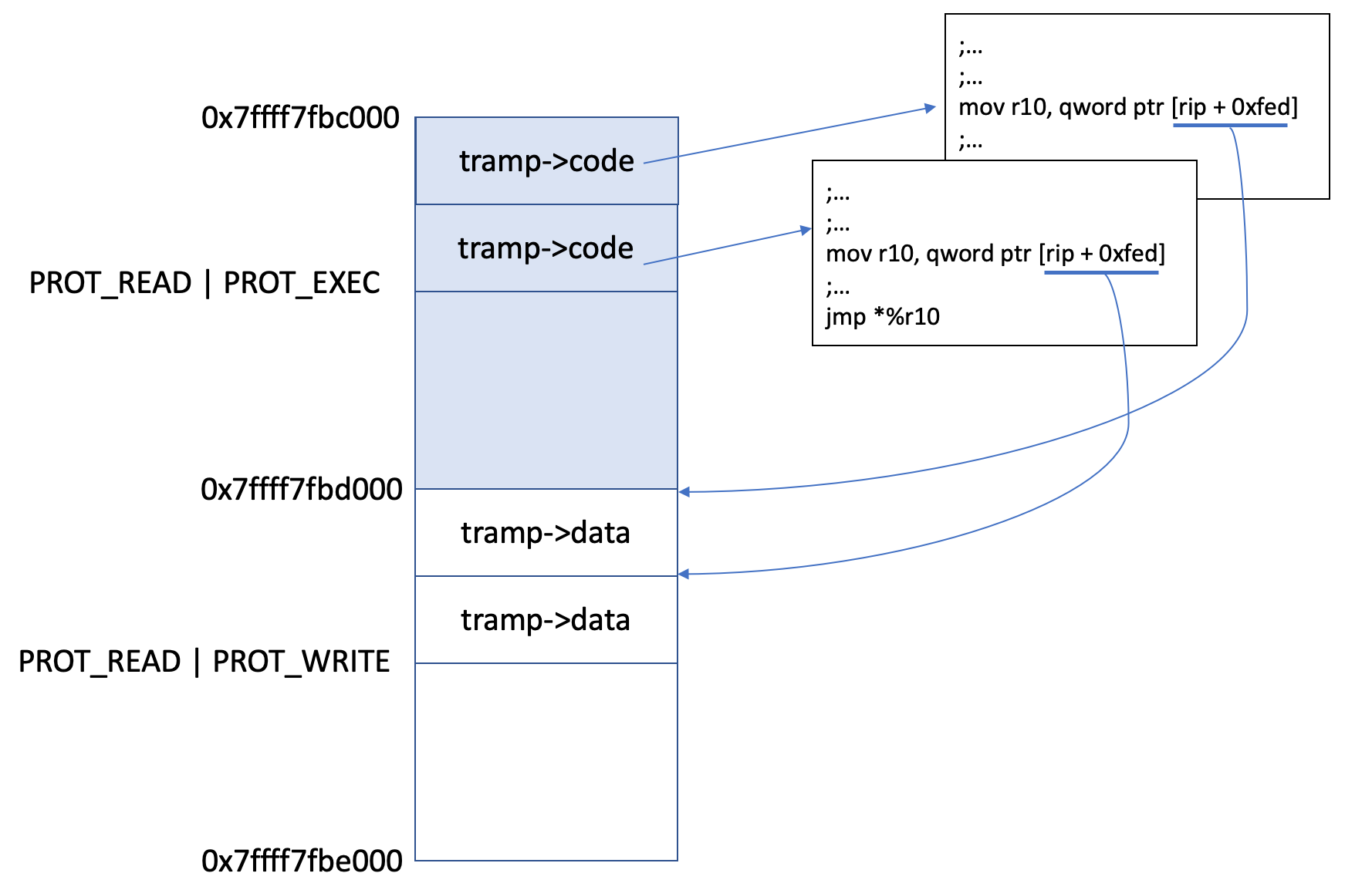 Update(08/01/2021): The Trampoline mechanism also eliminates the need for Writable/Executable memory since the content of the tramp->code is generated at compile time.

To check whether my understanding is correct, I also write a demo. Check it at Github.

The core library is less than 100 lines and should be easy to understand compared to libffi. If you feel it helpful, don’t hesitate to give it a star.